This week two encounters rattled my happy equilibrium of recent months. For most of the week I wasn’t able to fully articulate why and I hate that!

There was no drama.  No heated exchange of words. In fact there was nothing particularly special about either situation to cause a dark cloud to drift across the blue sky of my world.

On both occasions I felt like I’d become a more rubbish version of myself.  It was like the light had been dimmed and my energy diminished.  I began to doubt myself and was slightly less self assured in what I said.

What the hell was going on? This wasn’t me.

The more I wrestled with the why the more irritable I became until I had primed the beginnings of a downward spiral of negativity.  Helpful advice from friends fell on deaf ears.  Even the icy cold slap in the face of ‘Let it go’ was not enough to bring me to my senses.  I do love to ruminate but even I was boring myself on this one.  ‘Urgh – get over yourself woman!’

For whatever reason the idea of kryptonite entered my head and I found myself googling it. There is A LOT of information about a substance that isn’t even real.  Did you know that there is more than one colour of kryptonite for example?  I thought it was just green but apparently not.

It seems that Superman requires the sun to power him up like some kind of flying solar panel.  Kryptonite blocks this process. I felt like I was onto something deeply profound…. ‘so if I just google How does Superman defeat kryptonite? I’ll have this all figured out. Brilliant!’

Minor problem – there is no answer.  Balls.

The following day the fabulous Olwen Williams (@OlwenOlwen) tweeted this: 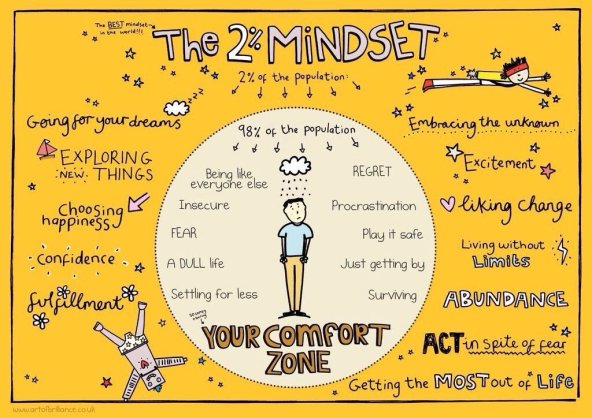 It dawned on me that the source of my kryptonite originated from the middle of the chart.  I had come across this concept before during a leadership course.  Various people/studies have looked to psychoanalyse those working in the NHS.  It seems each healthcare group has a unique personality profile.  In fact it turns out 98% of doctors, nurses, managers etc are all uniquely the same.

I remember one such person commenting in a proud fashion that after 30 years the NHS had finally turned them into one of the 98%.  I was dumbfounded that someone could be proud of that.

My profile is consistently not in the 98% and to see it illustrated in such a way was my light bulb moment.

I’m nearly 20 years a doctor and in that time I have struggled with conforming to the perceived norm.  I have been consistently told to change.  I have been told ‘we don’t do things that way’  that I am a ‘new broom’ wherever I go.  I have also listened to some who talk of being the 2% but their actions would suggest otherwise.  I have also heard the same people talk of their support of the 2% only to put up barriers at every turn.  It has been a confusing and at times, lonely place to be.

What I have learned and what I say to other two percenters  is to ‘keep being you, keep doing what you do because you are awesome!’.  There are others out there.  We’re pretty easy to find. Just look and invariably you’ll see our light…..